My dear friend Catherine, also of college-year-abroad fame, has created a migratory life for herself, spending Winters volunteering in Guatemala and traveling to visit friends and Spring, Summer and Fall working for the forest service creating and maintaining the many beautiful hiking trails in the Cascade Mountains. She makes her home in Darrington, WA, a small town surrounded by majestic mountains with a strong community of like-minded current and former trail workers who live lightly on their land and keep their backpacks handy. We kicked off the visit with a rousing knight of contra dancing in the grange hall. I spent three days with her in the cosy cabin-like house she shares with two friends, cooking, harvesting the last bounty from her abundant garden and talking about life. We went with some out of town friends and their adorable tots to visit the recently completed accessible train loop Catherine’s helped create and admired the wide, icy looking river that passes behind her house.

Monday, when she had to work, I bundled up against incipient rain and walked six miles along an old rail-road bed to visit another of her friend’s house-under-construction( which I unaccountably forgot to photograph). I did soak up the landscape on my hike though. I was synchronously listening to the opening chapters of Lois Bujold’s Beguilement which centers around a young woman walking a lonely road to an unknown future and my imagination rapidly peopled the trail with mysterious horsemen and the woods with dangerous creatures but in reality I met only an elderly couple and a woman with a dog. 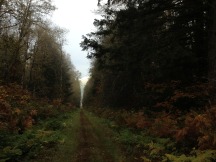 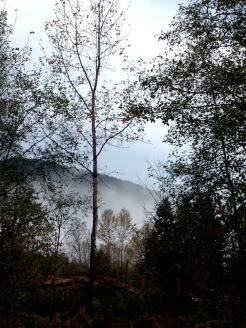 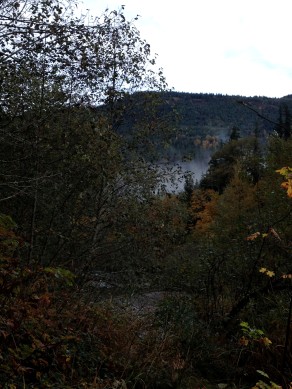 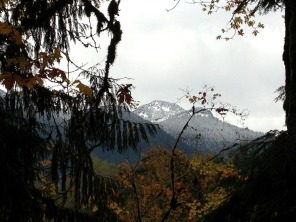 I love the woods of the Pacific Northwest. They always remind me of something primeval with the huge straight trees, dangling moss and uneven forest floor. I think of them as very foreign to the forests I know at home but had to laugh at my defensive reaction when a Washington State local described her recent trip to Minnesota to canoe the boundary waters and told me that the forests of the midwest were “very small.” I was bristling apace when I realized that its all a matter of normalcy – It makes sense that she would think that since I think the woods of Northwest are very tall. Especially when compared with a three year old. 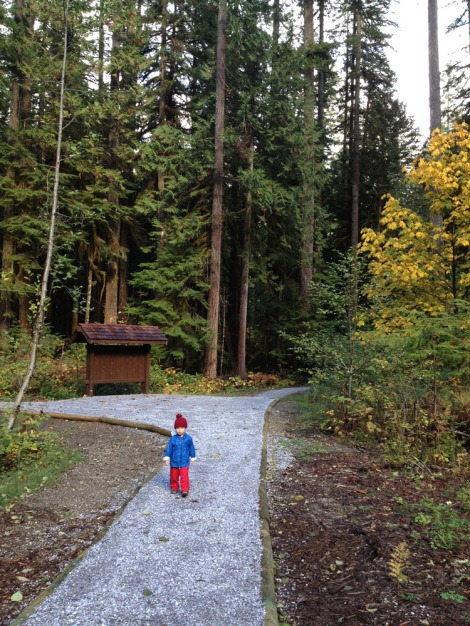