I wasn’t quite sure what to expect from Catania, which I chose to visit mainly because it was between two other sites I wanted to see (Taormina and Siracusa) and because I liked the looks of its hostel.  It turned out not to be my cup of tea as much as Palermo because its a city much more Baroque then Medieval but it was very interesting in spite, or actually because, of that.  The reason its such a Baroque city and has no classical or Norman sites of note is that the city was almost totally destroyed by a volcanic eruption and earthquake  in close succession (shades of Pompeii) 1669 and 1693 respectively and rebuilt after that period.  As such it is impressively baroque – with a stunning cathedral facade and many lovely civic buildings.  It took me a little time wandering the city to realize that not only did they build back after the eruption but they built on and USING the lava flow.  The streets are literally paved with volcanic rock and once I started seeing the black stone it was everywhere, protruding from the groundscape under the bases of buildings, in the foundation stonework of important buildings and everywhere underfoot. 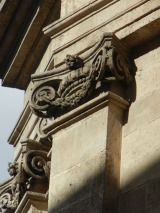 This is the first time I’ve ever seen Corinthian-type column capitals with scroll work that is actually carved out all the way through. I had to walk around the building several times to confirm it. The detail is really impessive.

The amazingly huge door of my hostel. Fully 16 feet high – it is as tall as the ground floor story. 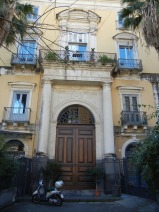 To open it I had to lean and thrust with my entire body weight. I felt like a munchkin.

Streets paved with volcanic stone. Talk about getting back on the horse.

Black, lava stone is everywhere in the city.

Sicilians take double parking to an art form and. An easily block up a six lane city thorofare with such a tangle of dumpsters parking and stopped trucks that a city bus can’t get down it.

This church of no particular historic importance was across from my hostel.  I went in due to propinquity but I stayed because it was such an impressive job of modernizing a baroque church.  Many such churches which once featured (presumably) beautiful paintings, frescos and trompe l’oeil have been simply been whitewashed in the intervening years resulting in a flat, stale and unprofitable appearance which irks me.  This place has clearly had the same paint-over treatment but chose to pick out the remaining wooden detail in a subtle contrast of yellow and white.  I really appreciated the effort.  Good job, cheery, modern church! 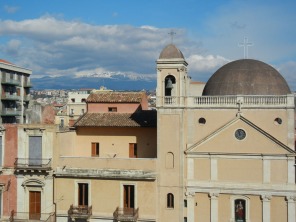 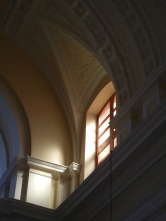 The local university campus – a former monastery – was a great example of post eruption rebuilding.  I took an Italian language tour of the complex of which I understood not a word (really fast talking) but did get access to many interesting locked and closed off spaces.

But for the most part the former monastery is totally baroque.

The former kitchens with an island oven space accessible from four sides.

Looking up to the kitchen from the cellar below. 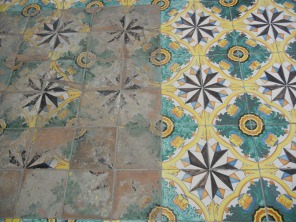 Original and copied tiles from the dining hall of the monastery.

which is now a lecture hall. This is what I mean about just painting the old frescoed walls white. Its sad.

The library in the volcanic basement.

A roman house was discovered in the basement!

Finally, the cathedral piazza.  It had just rained but the sunset was coming out of cloud cover behind me, resulting in this gorgeous light. 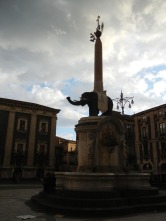 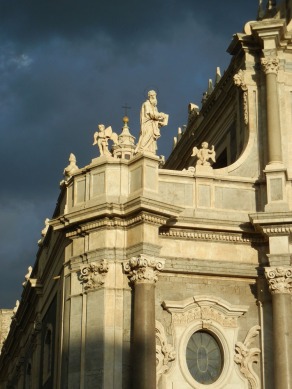 Another example of the amazing hollowed out scroll work. 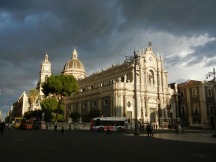