I arrived in Morocco at night after a one week detour to the Netherlands (posts will have to come later – I was too immersed in experiencing it to blog about it) and its always hard to get a sense of a new place when you arrive at night.  My first impressions of the city were chaotic and fractured by the speed and abrupt turns of my cab driver as we whizzed through the night time streets.  When I emerged from my hotel in the morning to spend the day exploring Casablanca I was astonished to find the place so generously proportioned, whitewashed and grand.  Some of it was a little dilapidated and faded grandeur but it was all grand nonetheless.  Casablanca was adopted and extensively re-planned and built up by the French during the 1920’s and 30’s and, as such, it is a monument to art deco styling, wide boulevards and white stucco.  I didn’t stay long in the city – just a morning and afternoon but I thoroughly enjoyed it.  Then after lunch I picked up my bag from the hotel, hiked back to the train station and hitched a ride on the Marrakesh Express.  More on that tomorrow.

I was on a boulevard just exactly like this (plus a canal) in Rotterdam five days ago.

The central post office. This is the most beautiful ceiling I’ve seen on this whole trip. Including every mosque in Turkey. WOW. 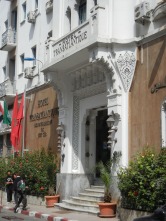 This construction method reminds me of India.