Utrecht is a charming old city whose sleepy center sticks in my mind as its defining characteristic despite the punishingly commercial shopping-mall-gauntlet one has to run between its train station and the city center.  I also know, intellectually, that it is the home of the largest university in the Netherlands and has its own commercial and cultural  centers independent from Amsterdam. To me, though, it always seems like a sweet backwater, a place for a peaceful ramble and somewhat ancillary to Amsterdam or to the other, more rural places connected to my family history, that I am passing through it to visit.

The defining character of the city is created by its two level system of streets and canals.  The main activity of life takes place at street level and the basement level canal borders are private gardens or pannenkoeken restaurants today.  Back in the cities commercial prime, they served as necessary and heavily trafficked functional alleys – delivering raw materials to the functional level of shops,  restaurants and private homes.  These photos serve as a record of the transect I walked from the city center, past the dramatic Dom tower and then out into the more quiet suburban districts, to make a pilgrimage to the Rietveld Schroeder Huis one sunny Sunday. 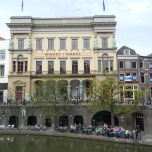 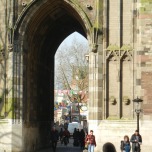 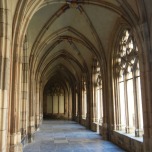 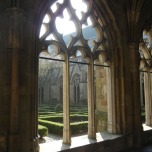 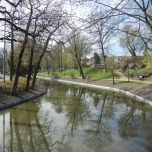 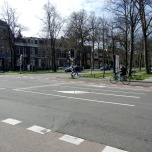 This photo series is entirely one building.  The newest, deconstructivist, facade caught my eye as I was walking around town before moving on and, once I was drawn in to start exploring, I was so intrigued that I ended up taking a later train out of town in order to buy more time.  The Stadhuis, or city hall building is actually a complex of buildings from many periods dating back to 1537 (the original structure was constructed in 1343), taking up what would be an American city block and spanning on of the city’s principal canals.  The current iteration, courtesy of Spanish architect Enric Miralles, was completed in 2000 and preserves the regency period facace on the Oude Gracht but slowly injects more and more modernist elements around the facade until the reverse side is a riot of faux walls, concrete interventions and mysterious fountains.  The interior layout centers on the neoclassical central meeting hall which is punctured with new windows and accessed by a curving pendant balcony that gives great views of the stunning collection of portraits showcasing local dignitaries through Utrecht’s history.  Color me completely enchanted. 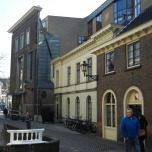 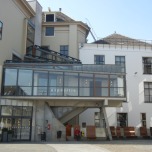 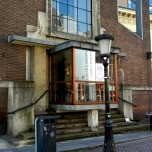 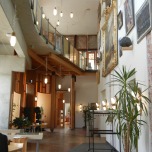 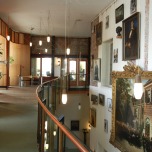 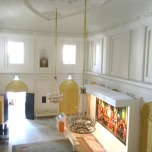